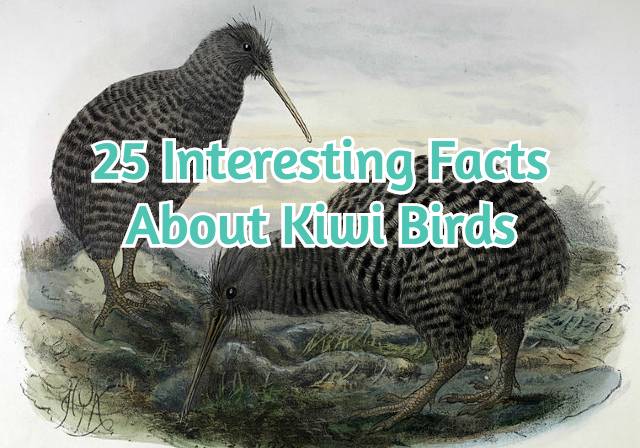 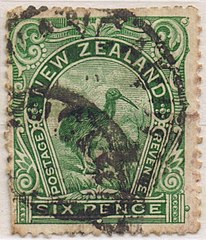 I’d like to share 25 Interesting Facts About Kiwi Birds with you. I think everyone knows that the Kiwi Bird comes from New Zealand. I’m hoping that while writing this post, memories of my trips there many years ago will come back to me.

The Kiwi Bird is the national bird of New Zealand and you’ll see its symbol emblazoned on any kind of merchandise you might find, along with the silver fern. The bird is treasured especially by the Maori people and its significance for them is held in very high regard in spiritual, cultural and historic situations dating back generations. 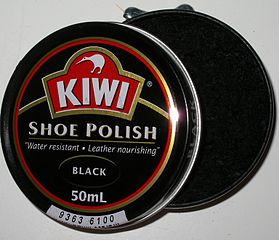 As a side note, the Kiwi people gained their nickname from a brand of shoe polish during the 1900s, when the inventor named it after a bird from his wife’s native country. The polish became so popular that ever since then, Kiwi has come to mean anyone from New Zealand. So as you can see, the Kiwi Bird is a very proud symbol to the people of NZ.

25 Interesting Facts About Kiwi Birds (in no particular order)

1. The Kiwi Bird is nocturnal, the size of a chicken.

2. There are approximately 68,000 left in the wild and every week, numbers decrease.

3. Sometimes called an “honorary mammal” due to its hair-like plumage. The female also has two working ovaries which is unusual in birds.

4. The only bird to have nostrils at the end of its bill, not at the beginning.

5. Kiwi Birds do not fly and consequently, they do not migrate.

6. Their bill can measure up to 15cm (6in), perfect for digging around in the night soil for their food. Officially though, they have the shortest beak of all birds because the measurement should be from the tip to the nostrils. It is curved at the end.

7. They are monogamous animals. Some relationships can last for 20+ years.

8. Their wings measure only 4-5cm long. Each wing masks a claw in the feathers.

9. On each foot, they have 4 toes and plump pads so they can move around easily and silently on the forest floor.

11. Dinosaur-like, they don’t have the same bone structure in their mouths and jaws like other birds.

12. Classification: Order Apterygiformes / Family Apterygidae / Genus Apteryx / 5 species. Apteryx means wingless in Latin. They are the smallest bird from the same family as the ostrich, emu and cassowary. 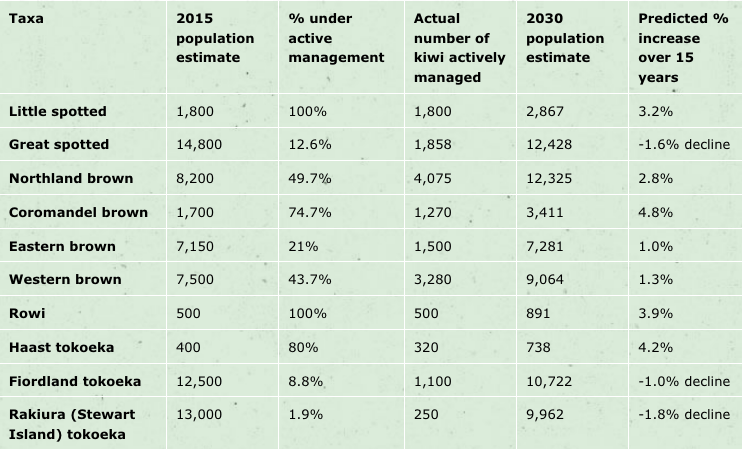 Screenshot taken with thanks from https://www.kiwisforkiwi.org/about-kiwi/kiwi-species/

14. They cannot be found in the Northern Hemisphere in the wild.

16. Males reach sexual maturity at 18 months of age. To attract a female, the male will sing and use pure perseverance and stamina until the female succumbs. The female is bigger than the male so she will determine whether mating will take place or not. Mating season is between June to March and failure to produce offspring can result in “divorce”.

17. A Kiwi’s eyes are very small in comparison with other nocturnal animals. These birds are particular in that the parts of their brain dedicated to touch and smell are much larger and so, large eyes were deemed not necessary by evolution. 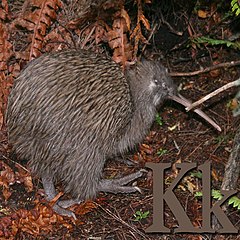 18. Although nocturnal creatures, these birds have very poor eyesight and use their olfactory, tactile and auditory senses to amble around and search for food. Quite noisy when hunting (they make snuffling noises as they smell out their food), their bills and whiskers are extremely sensitive to finding nourishment in the soil and fallen leaves. They will use their nostrils to smell prey and feel the vibrations the prey makes. They can detect prey 3 cm beneath the surface and then they dig deeper to pull out their find.

19. While others are nocturnal, you might be lucky enough to spot the Stewart Island tokoeka during the daytime too.

20. It looks like they do a kind of handstand when they dig for their prey.

21. Omnivores, they eat worms and other insects that move up to the top of the soil after dark. Also, berries and seeds. Little water as this is gained mostly from insects.

22. For nests, they will find or dig burrows in the earth. 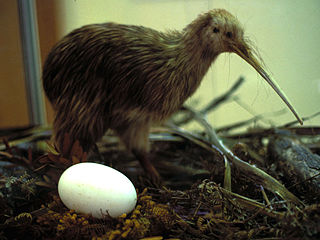 23. The female (sexually mature around 3-5 years old) will lay 1 or 2 eggs which hatch after 70-80 days of incubation by the male. Only about 5% of hatchlings will survive, the others will be hunted mainly by stoats or cats. Hatchlings are born with plumage and they feed alone (after about 5 days in the nest), never by their parents, although the parents will care for their welfare.

24. The main predator of an adult kiwi bird is the dog or the ferret. A gentle nudge from a dog is all that is needed, let alone a grasp in a dog’s jaws.

25. Scientists know that the kiwi evolved 70 million years ago from a flightless ancestor and are still, to this day, working through the origins of this bird and where it’s relative DNA is connected to. Some say the emu; some say another bird called the elephant bird from Madagascar (now extinct) and when and how it came to be found on the islands of New Zealand. 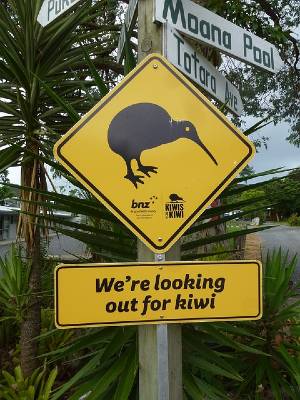 Humans are again to blame for the demise of this bird. Deforestation, fire, traffic collisions and the introduction of some mammals to the islands, namely cats, dogs, stoats and pigs have reduced numbers drastically.

Conservation programmes exist to protect this unique creature in the wild and on land where predator numbers are controlled. There are also islands free from natural hunters. Approximately 20% of these birds are so far protected but the rest could so easily be eradicated by introduced mammals. Would you like to help protect the Kiwi Bird? Please visit HERE for info.

Have you ever seen a Kiwi Bird in the wild? Where did you see it? Do you know which species it was? I’d love to read about your experiences in the comments below. Thank you for reading ?